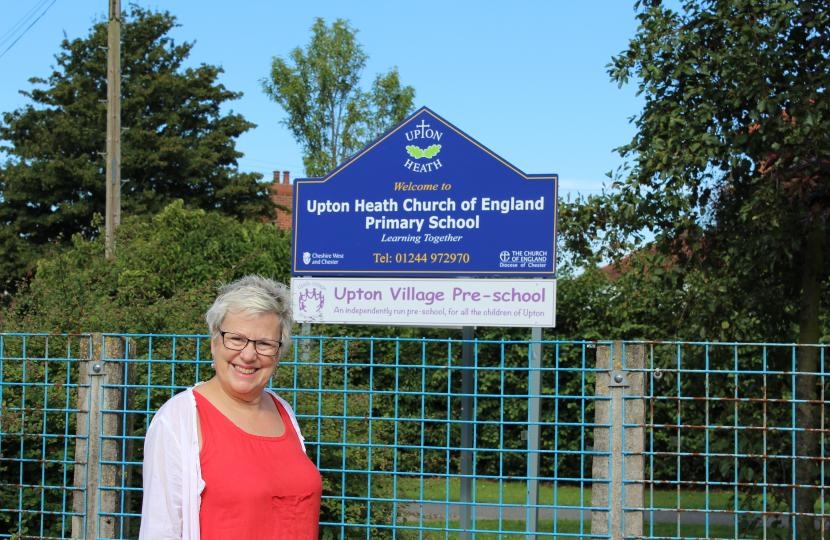 Over the past few weeks signs of Spring have been popping up around Upton. It’s good to see early blossom, buds and bulbs flowering in the verges and gardens.

Unfortunately there has also been an upsurge in the number of complaints about litter, bins and potholes. I’m waiting for the results of the investigation that we have been promised by CWaC into why public litter bins have been been left overflowing and why there has been an increase in fly tipping in Upton, and in other wards. I’ve been inundated with photographs, kindly sent by concerned residents, of the bins and rubbish strewn around our lovely parish. The problem hasn’t yet been resolved and I continue to receive complaints.

Also still ongoing, although also under investigation is the flooding on Wealstone Lane. Despite efforts by Highways the issue has not been resolved and requires further work. I have been assured that the problem is being given priority.

The new Zebra crossing again on Wealstone Lane is soon to be installed. Some residents have again raised objections but the site has been chosen as being the most suitable after a thorough safety assessment. I don’t yet have the date for the work to begin.

There are quite a few street name plates which need replacing or cleaning and I’ve been told that those I have reported will soon be attended to or replaced. In addition new signs directing people to Weston Grove shops are due to be erected in the near future. I do share the frustration of people who run businesses on Weston Grove but I hope the fly posting that has recently appeared will be removed as it does make the area look untidy.

I have been disappointed that the litter on the A41, Duttons Lane and Acres Lane has not been cleared away despite continued requests. As both Duttons Lane and Acres Lane are still subject to a 60 mph speed limit the street scene team is working with Highways to make the areas safe for the work to be carried out. There is also a problem with the ditches on Duttons Lane being full to overflowing so Officers are liaising with the owners of the land who have a vicarious responsibility for the ditches.

On 5th April I have arranged to meet with Mark Brazil, Senior Street scene manager to discuss the how best we can tackle keeping Upton clean and tidy. I will give a verbal update at Parish Council.

Members will be aware of the gardening initiative (please see below) and I hope as a Parish Council we can not only take part ourselves but encourage residents to ‘dig for victory’. I would like to suggest that we take this opportunity to investigate using Parish Council land to establish an organic community garden. We have a thriving Growing Spaces group and a thriving long established Horticultural Society in Upton and many gardening enthusiasts living in the ward.

At the below links are some examples and inspiration for us to consider:

You will probably have been made aware that recently a much loved family pet drowned at Knolls Bridge culvert in the Country Park. The responsibility for the investigation and taking any enforcement action is now with The Health and Safety Executive. I am keeping in touch with the owner of the dog and with the group supporting her and the CWaC Health and Safety investigating Officer. But given the current situation I would prefer not to make any further comments as I don’t want to prejudice or influence the ongoing proceedings. As you might imagine there has been interest from national media and I have dealt with enquiries in the same and consistent manner.

Councillor Bryan and I are working together in an attempt to influence Stagecoach Bus Company and to persuade them to reverse their decision to run the no 1 bus on Upton Lane instead of Mill Lane. The plan is that the No 1 bus will be replaced by no the 26 service, which is much less frequent and is inconvenient to regular users. Last weekend we knocked on doors on Mill Lane to gauge the impact the change will have on residents. Everybody to whom we spoke was shocked not to have been informed of the change and disappointed that the reduction in the regular useful service would impact their usual travel arrangements. We plan to deliver a flyer to residents giving information about the changed service and encouraging them to contact Stagecoach with any objections.

Although the A55 is not directly connected with Upton I have been waging a personal campaign about the disgusting amount of filth and litter on the road and I’ve been supported by many many residents from across the borough. I’m pleased to report that I’ve been informed CWaC is now working with Highways England to tackle the problem. I hope we all see a vast improvement very soon.

Three years ago Councillor Bryan and I met with Highways and we agreed to use 106 money to fund a cycle Lane on Liverpool Road (A5116). The work is still outstanding and I’ve been trying to find out why. It transpires that the 106 Officer was not aware of the plans and therefore no progress has been made. We now need to know how much 106 money will still be unspent and available once the cycle lane has been completed. We can then look at how and where any surplus can be used. The machinations of this particular department of finance seem to work very slowly and not very efficiently either.

I’m pleased to report that a resolution on the planning application for the ex Plush Spice site has at last been gained and I removed my request for a call in so the application can be approved under delegated powers. I’m sure members, like residents will be pleased to see the end of the eyesore the site has become.

The planning application for White Gables is the subject of negotiations with the developer and our Highways Officer is still waiting for a response to his report. I am keeping residents informed.

I’m still, as always, receiving complaints about inconsiderate parking near Upton schools and in particular Upton Heath and Upton High School. PC Rob Brown and PCSO Jenna Tapley have visited both areas to encourage drivers to be more responsible and staff at a Upton have increased the patrols they carry out. However judging by the photographic evidence I’ve been sent there are some drivers who just don’t care who they inconvenience or if their parking might put the young people in danger.

Over a year ago working with our Localities Team I tried to encourage all our schools to engage with the Parent Parking Charter, disappointingly only one school, Westlea remains committed to the project. The childrens’ project and banner was due to be launched now but because there is a by election in Ellesmere Port, all the authority is in perda and the launch has been postponed. My reaction to stopping all such activity right across CWAC is that it is excessively constricting and unnecessary.

Since our last meeting some Parish Councillors and our local PC and PCSO, met with the Cheshire Police and Crime Commissioner, David Keane. I’d like to thank David for accepting my invitation to Upton and for what I feel was a useful and friendly meeting. One of the issues raised and which David said he would address is the lack of speed cameras and sites in Upton where they can be used. It’s disappointing for our residents that twice in the last 14 days the Police have been out on Plas Newton Lane but our Upton Officers can’t do the same here. Those of us at the meeting agreed it would be worthwhile to set up a community speed watch team and this idea will be raised at the Annual Assembly.

Finally I’d like to clarify for residents that there are no local elections this year but in 2019 elections will take place across all CWaC wards. The elections next year will reflect the changes in Ward boundaries as set out in the final decision by the Boundary Commission.