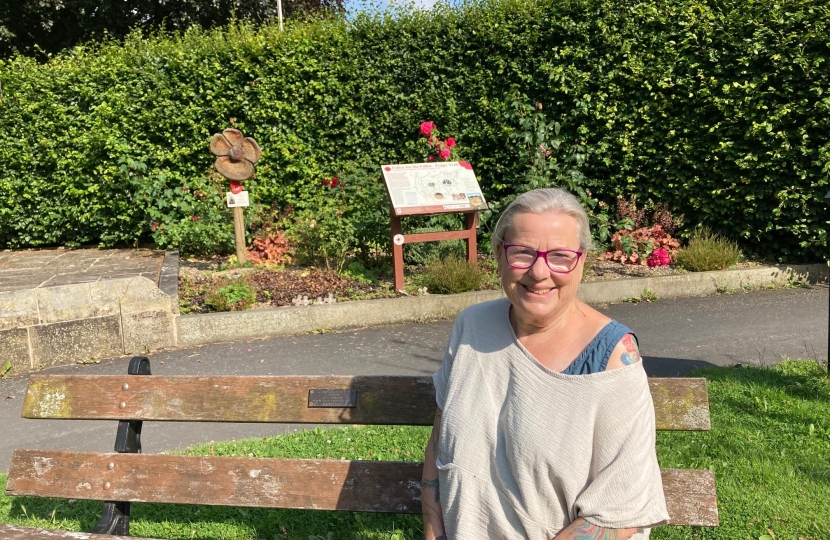 The end of last week was dominated by contacts from residents concerned and puzzled that they had received a letter from CityFibre saying work in their street was about to begin. Given that the fibre connections are likely to be switched on at any time the letter seemed at the best bizarre.

I'd like to thank our CWaC officer for his swift responses to my emails and calls as we attempted to sort this out. The response from CityFibre was that they have recently engaged the services of a new communication company. The letter was intended for just a few roads where work is needed. The company had delivered everywhere.  I have expressed my views to our CWaC officer so he may pass them on.

We have a ward 'walkabout' on Wednesday 13th to look at and report back to CityFibre on the complaints from our community as their work draws to a close in Upton.

Peter Burden and the Cycle Without Age Project

Very recently and wearing my Sheriff's hat I launched the Cycling without age project.

The trishaw at the event was named Peter and celebrates the life of Peter Burden who was a long-standing resident of Upton by Chester and an active cyclist. The group currently has two vehicles which are stored in Upton Dene nursing home. The scheme was funded by the CWaC crowdfunding programme but as it didn't quite hit the target to get going I was pleased to top up from my ward budget.

Once permission from The Land Trust comes through then volunteers will take the trishaw out in the Countess Of Chester Country Park and the group is looking to raise money to purchase more of the vehicles and offer rides over a wider area, but not on public highways.

The concept of cycling without age is to benefit older people, those of all ages who are less mobile and not in a position to enjoy a bike ride. The feeling of fresh air and relaxation on my ride was obvious and the benefits this project brings are palpable.

I am sure members are aware last week the planning application to convert the Stables at Chester Zoo to an events venue debated at committee. The application  was passed unanimously by planning committee. A resident spoke eloquently behalf of the neighbours. I do feel that it given this Parish Council raised concerns and commented on the application it should have been represented at the meeting.

I am aware that a community group is asking questions about the implementation of 20 mph on all Upton roads.

While I am happy for anyone in our community to contact me about this I do need to manage expectations within Upton.

Some of the roads mentioned on the Facebook page do not comply with the National guidelines /criteria for the reduction of the limit to 20mph and believe me I have tried over the years to have other streets included in the zones.

I think we must also recognise that any changes to the speed limit would take some time to implement and would cost money so these are more hoops through which to jump.

Added to this is the knowledge that to be effective speed limits need to be enforced and might not be welcomed by everyone who uses the road networks.

The surveys for crossings on Weston Grove and Caughall Road have yet to take place but again there are national guidelines with which local authorities have to comply.

I popped along to Flag Lane North last weekend to follow up on a complaint about green waste dumping but also see the parking issues with which residents contend especially on a sunny day.

The state of the road surface is appalling near the bridleway so I have asked Highways to consider resurfacing and for kerbs added to reduce the width of the road. I appreciate there is a considerable cost involved but I feel it's worth asking.

Over the past weeks I have received several complaints about bonfires. I asked for information from CWaC and here is the answer which I think is very helpful:

"In dealing with bonfire complaints, in the first instance we would write to the alleged source informing them that a complaint has been made and inviting them to consider their actions, we would provide them with information about bonfires.

Residents are allowed to have occasional bonfires on their property provided they do not regularly affect neighbours ability to use their property and inappropriate material is not being burned.

When the informal approach does not resolve the issue supplementary evidence is needed from the complainant to demonstrate that the issue may constitute a Statutory Nuisance. We consider the frequency, scale, what is being burned and proximity to others.   We may requests neighbours complete diary sheets for a period of 3 weeks, logging details of when and how they are affected.  Date stamped photographs are also a valuable form of supplementary evidence.

Persons can report bonfires by calling 0300 123 7038 we would need the complainant address and alleged source address.

We do see (particularly during warmer weather) an increase in the number of complaints relating to garden bonfires and during the spring/autumn periods when people start to work on their gardens."

Overview and Scrutiny of 'Rubble Tax'

In conjunction with this members may know that on Monday (April 11th) the Borough council Overview and Scrutiny committee agenda is dealing with the scrutiny of Household Waste Centres and with the charges and changes to the disposal of the waste including what has been termed the 'rubble tax'. Although I cannot attend a colleague is reading my submission for me. My points are based on the comments and concerns I have received from our community.

I am happy to share this should members wish to read it.

There are many and continuing complaints from residents about the dreadful antisocial behaviour of some dog owners in Upton. The Upton Community Group will be carrying out the pink poo scheme in June. In the meantime I have requested some dog poo bag dispensers and will cover the cost from my ward budget. Although I have not yet received a reply from CWaC even though I have asked twice.

I have also asked for a new bin to be placed on the Public Right of Way at the Daleside entrance.

Please keep on reporting on the website or the app. https://www.cheshirewestandchester.gov.uk/residents/streets-and-open-spaces/dog-animal-fouling.aspx

At the end of March I reported (again) the dreadful condition of the footway and some potholes on Endsleigh Gardens and Close.

Disappointingly I received the standard reply which basically says the pavements are not bad enough to warrant repairing:

'Dear Cllr Houlbrook
Reference your enquiry regarding the condition of the footpaths on Endsleigh Gardens I have attached out details regarding requests for resurfacing Our maintenance budgets are prioritised and allocated based on well-established condition data; all carriageways across the borough are considered on an equal basis.

Using our asset management approach to maintaining a safe highway network across the borough, whilst those carriageways which are in the poorest condition will often be treated first, other sections of carriageway, which may not appear in need of repair, may receive a preventative treatment to prolong their life. This approach is used on all roads across the borough to optimise the funding we have.

Condition of the Highway network is annually assessed by our Asset Management team who then formulate our resurfacing and surface treatment schemes for future capital improvement programmes.

The condition of this road will continue to be monitored through the annual condition surveys and in the meantime, we will continue to undertake regular inspections of the road in accordance with our Code of Practice for Safety Inspections; defects highlighted during such inspections will be prioritised and repaired where required.'

I'm becoming used to these stock answers and I can only imagine the state of streets which do fit the criteria.

Complaints about the new waste collection service rumble on.  As the result of a complaint I've been chasing up a replacement food caddy for a resident.  I've been informed that there are NO brown caddies in stock and the contractor has none. There's going to be a statement on the website. Meanwhile residents are asked to use the small kitchen caddy and if that's too small to put the excess food waste in the grey waste bin. Not ideal I appreciate but better than putting food out in a bag as first suggested.  I would like to thank the resident who had a spare caddy and donated it to the resident.