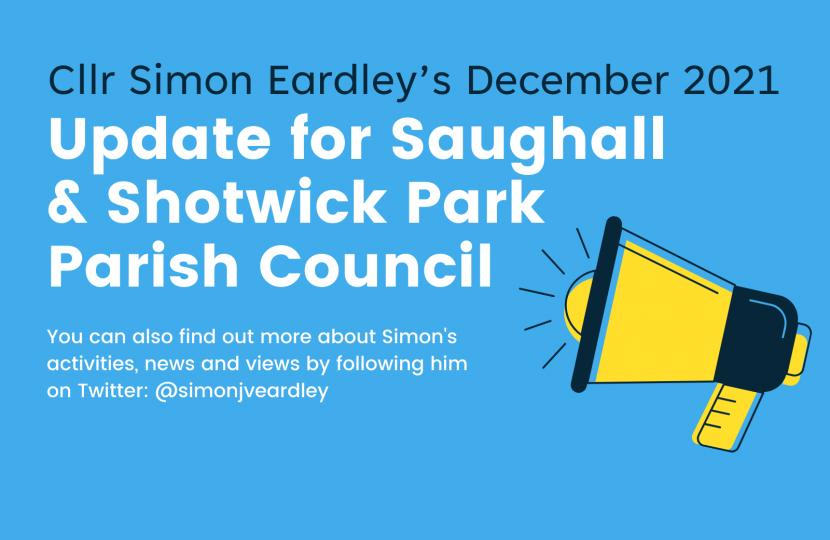 Colleagues will recall the extensive correspondence and engagement on this subject as reported by me in November and the expectation of an update from the Member of Parliament (and his colleagues within the CWaC Cabinet). I emailed as follows on 05/11/21:

“Following the online meeting on the above a couple of weeks ago, you indicated that ideally you’d send an update after this time period on any progress that might have been made. I was just wondering if there was any update at all?”

The response received from Cllrs Richard Beacham and Karen Shore was variously as follows:

“I think it was Karen and I that said we would come back on this. I am sure you can appreciate we can’t just do something which has financial implications without running through the appropriate processes. I am conscious of the time, but I am also conscious of the complexity so I would ask that you give us the time to come back with something that is realistic, achievable and seems to respond to some of the points made by residents at the meeting.” [RB]

“Just to add, work is progressing but I think my commitment word for word, was; ‘I am not going to say two weeks on Thursday because I can’t promise that but it will be this term’. It’s important we do manage expectations and as Richards says, have a workable realistic solution. By way of update, we have made some good progress but we’re not quite there yet. Your patience is appreciated.” [KS]

As the end of term is approaching, I look forward to progress on this now being confirmed by those who have undertaken to bring this about. I also note the note from the Clerk to the MP pressing him for an update which is helpful.

I regret that I have no further information to report in respect of the ongoing issues at this site, other than that noted in my October report. My request to the Member of Parliament was that we convene various meetings once again to pursue this but there has been no external progress on the matter.

Residents will receive more information in the New Year concerning the implementation of the overall new waste collection service (practical matters relating to deployment of new hardware etc). In respect of green waste (the collection of this is now suspended for the winter), I can advise as follows:

- Online registration to sign up to the new chargeable service will commence in December 2021. It will also be possible for residents who are not easily online to request the service via a Customer Contact Centre. Permits will be issued to residents on a yearly basis which will allow operatives from Cheshire West Recycling to collect bins from those who are part of the service.

- The green waste service will be offered for 40 weeks of the year with a winter suspension of 12 weeks.

- Residents are encouraged to sign up for it at the start of the year but can do so mid-way too (but will be required to pay the full £40 per bin charge).

- A concessionary rate will be available to those who qualify, full details tbc.

- Woodside House, Church Road. As noted in November, the applicant here has lodged an appeal which will be considered by the Planning Inspectorate in due course. I met with the applicant on 26 November 2021 to hear directly some of his concerns around how this application has been dealt with and have noted them accordingly.

- Land to the rear of Roslyn, Long Lane. The case officer for this application continues to work through the detail, including the extensive representations that have been made and also in terms of collating additional information. I am committed to pushing this application to the full CWaC Planning Committee if necessary (it is ‘called-in’ by me) and will keep colleagues informed in due course.

- Meadowcroft. An appeal has been lodged in respect of a property here and concerns around its external appearance / compliance with planning policy. This will be heard during December 2021 via written representations.

I’ve had some correspondence and contact in recent weeks with the Shotwick Park Estate team and with relevant officers of CWaC to see what the latest is on this project. I am able to report that the transaction is progressing and the Council is working to achieve the sale as soon as is practicable. I’ll continue to keep colleagues informed.

I have received the following response from CWaC regarding the proposals put to Highways around possible traffic island infrastructure introduction at strategic points in the parish:

“I have yet to receive an indicative cost for island provision but could I ask if consideration has been given to my comment regarding suitability of the locations particularly on Seahill Road. I understand Hermitage Road to the greatest concern to the police based on recorded speeds, has consideration been given to an island on there?”

I have reverted to N to say it would be helpful to have a meeting with the Highways Group in the early New Year to explore all the points raised in the original correspondence sent (which has now been with them for several months). Consideration could then be given to the three original site proposals, which N has commented on already, and her suggestion above.

On 26 November 2021 I had a meeting with S and P of Hermitage Road. They have previously addressed the parish council on concerns they have in relation to speeding on Hermitage Road and I believe they may be present at the meeting on 06/12. Based on their knowledge and experience of similar matters at their previous home, I believe there would be much value in engaging with them further on these points, perhaps through the work of the Highways Group (a suggestion I have made to Cllr Kerr).