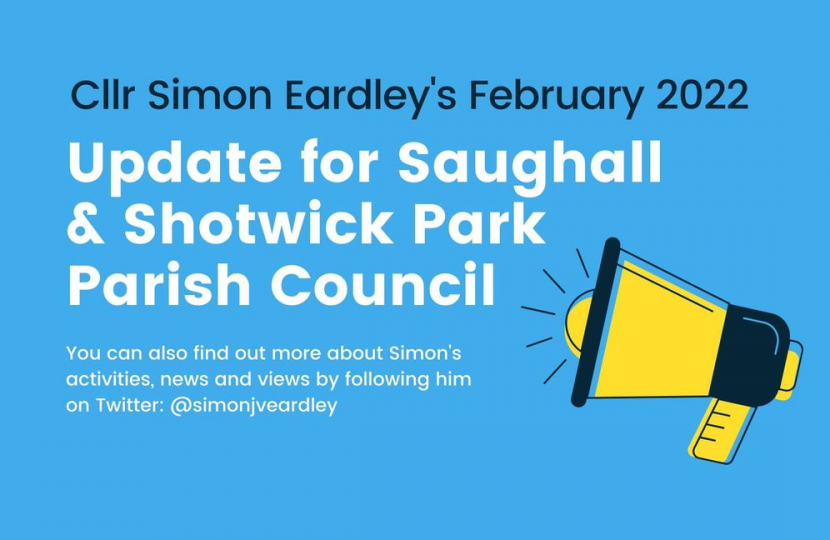 It was good to be at the latest meeting of Saughall and Shotwick Park Parish Council last night and to offer my usual report. I've copied it below for those who might be interested.

As indicated at the last meeting of the parish council, I wrote to all residents of Greenway with details of the proposed wildflower planting scheme that the borough council are looking to implement as part of their ‘Wildflower and Grassland Strategy.’ The proposal here is to create a council managed native wildflower meadow and I said in the letter that I would go with the majority view. This proposal was received positively by a majority of residents and I have confirmed it with the CWaC Environment team, together with the necessary resource from my Member Budget (£250).

Cllr Kerr will no doubt report more fully, but a meeting has been arranged with CWaC Highways to consider various issues for 11 February. The agenda will cover vehicle activation signs (results of any survey work since activation); Fiddlers Lane (request for an extension to the 30 mph limit); traffic calming proposals; parking on Saughall Hey. In terms of vehicle activation signs and any survey results, we are advised that the team are still working their way through the backlog of data from when it couldn’t be collected due to the pandemic (so consequently no monitoring has yet been undertaken at the sites of the signs) and that the requested speed limit assessment for Fiddlers Lane has not yet been completed.

I have reported issues with PROW route FP8 as follows:

"A resident has raised the following PROW in Saughall with me: FP8. Coming from Blacon it is on the right hand side after Kirkland House on Hermitage Road (see map too). Issues:
- Some of the steps on the stile are rotten and in need of replacement
- The route is largely impassable owing to the hedge which becomes problematic about 15 or so metres in. I think this hedge belongs to the field next to the route which I have marked with an orange X on the map (not available on this FB post)
Would you be able to have a look and see if we can make contact with the landowner if necessary to give the hedge some attention before the nesting season starts?

CWaC will begin to introduce their new waste and recycling service from w/c 14 February. This will involve the replacement of recycling boxes with 2x recycling bins. Existing boxes will not be taken away – residents can use them as they wish to take them to a HWRC for recycling and the same will also apply in respect of green bins where residents do not wish to subscribe to the new green waste collection service. If you dispose of your green bin, there will be a charge for a new one if you subsequently decide to sign-up to the service.

The first tranche of hardware deployment will be largely in the Winsford area and I will let colleagues know when Saughall residents are planned to receive their new kit.

I have included below a graphic (not present here) and some text in respect of the green waste service which may be of use. Please note that this text is for information only - this is not an endorsement of this new approach by me - I've opposed the introduction of what I regard as a green bin tax at every opportunity. Text supplied by CWaC: "Subscribe today for the £40 a year per bin garden waste collection service. It is quick and easy to subscribe and by doing it now you will receive all your 2022 collections. Subscribe at http://cwac.co/QuVbH .”

A full meeting of CWaC will take place on Thursday 17 February to set the budget for the forthcoming year together with the rate of council tax. It is currently proposed by the ruling Labour administration to increase council tax as follows: basic council tax by 1.99% plus an additional 1% to help fund adult social care costs, meaning a total rise of 2.99%. It is highly likely that I will vote against at least the 1.99% increase which I, together with my Conservative Group colleagues, do not consider to be necessary and will further increase pressures on household budgets at a very challenging time.

- I have requested the deployment of the mechanical sweeper along Kingswood Lane following a request from residents, with particular attention to be paid to the areas with gullies/drains.
- Litter continues to be an issue across large areas of the parish and indeed the borough. I am aware that correspondence from a resident of Parkgate Road will be considered by the parish council at its meeting. I also undertook a short litter pick on Fiddlers Lane / Kingswood Lane on 04/02/22 and collected a half bag of rubbish (the resident who has communicated with the PC has also doing an extensive collection). I would be in favour of a joint note perhaps from both the PC and myself being posted on local social media encouraging people to be responsible regarding litter disposal etc.
- There is an ongoing enforcement case underway regarding a property on Hermitage Road which may be operating without permission on a commercial basis (as a gym facility). I am in touch with a number of residents on this matter, together with CWaC officers.
- There is no movement on various planning applications of interest to the parish but I have a number of meetings due to take place in the coming days which I may be able to report on separately in due course, including the land to the rear of Roslyn (Long Lane).