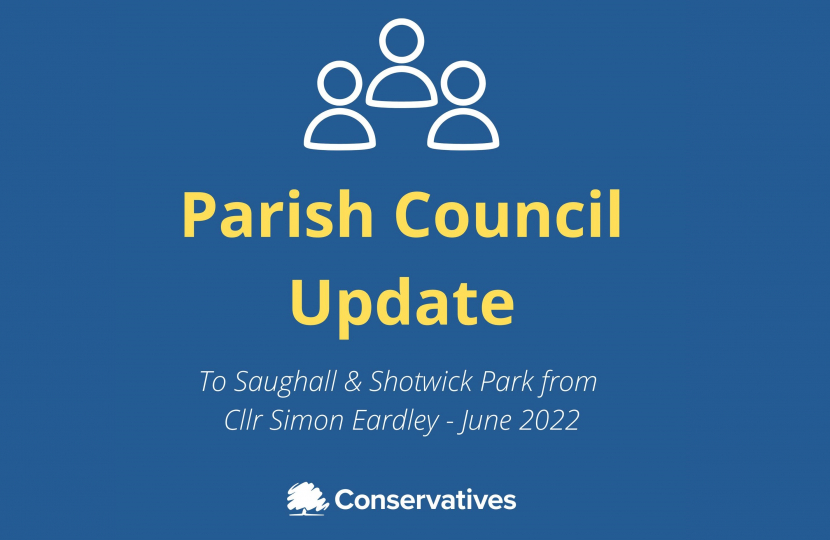 Firstly, may I say how much I enjoyed attending the Platinum Jubilee event on the Golden Jubilee Field on 04 June – a memorable occasion which looked to be much enjoyed by all who were present. I know that an immense amount of work went into making the event happen before and during the day by the team of volunteers. Fantastic community work and a fitting way to mark this most historic occasion in the life of our country.

Colleagues will know the proposed wildflower planting in the parish has been of interest in recent months. I was pleased to arrange a meeting with CWaC Environment officers on 13 May which Cllr Mike Johnson kindly attended on behalf of the PC and Sue Harris was asked to attend by Cllr Jenny Young on her behalf. The PC papers contain information relating to this meeting but I am pleased to see that the preparatory work has now been undertaken and we will soon see the initial growth which I trust will be welcomed and positive. I did hear a couple of residents commenting on it whilst walking to the Jubilee celebration, happily in positive terms. If this is successful, it would be good to extend this work to other areas and site suggestions are welcome.

To keep residents informed of developments, I posted details to my Cllr Facebook page and the initiative was well received. One resident commented that they would like to see tree planting undertaken in the green area of Saughall Hey. I am open to this being pursued, with suitable engagement with residents, and would welcome the thoughts of the PC on this before undertaken anything.

I note the report of Cllr Kerr following a meeting that I attended of the PC Highways Group on 26th May and await the outcome of deliberations at the June PC meeting on the points he has raised. Following the 26/05 meeting I went back to CWaC Highways on the following immediate points which relate to the VAS signage on Hermitage Road and the data that has been received in relation to other signage that has been operational since installation:

- An update on the timeframe for the reinstallation – which I know you have been chasing – of the Little Saughall end of Hermitage Road. It is taking a frustratingly long time as I’m sure you appreciate. I am pleased that this has now been reinstalled.

- Whether it would be possible to have comparative data for the Long Lane / Seahill Road areas so the group can see the welcome progress that has been made in comparative terms. This does look to have had the desired effect in both locations which the group is pleased about. We’d just like to have the information to judge against for interest. I await this information.

I had also been asked by residents living on the Saughall part of Parkgate Road whether it would be possible to consider asking CWaC to undertake a speeding / traffic survey on this route owing to concerns they have regarding speeding. Following the Highways Group meeting and other exchanges with CWaC Highways, I informed the latter as follows: “In relation to Parkgate Road which we have also exchanged about, I won’t seek to pursue that but I’d like to be able to go back to the resident(s) who raised it with me with a full response based on the email material you sent over. I assume I am okay to do that? I clearly won’t mention names and will reference Cheshire Police in particular as being a key factor in terms of their view about it which is clear and considered from what I can tell in that email exchange.” I am in the process of doing this.

"Telegraph" (it possibly isn't one!) pole, junction of Long Lane

Cllr Johnson and I have had correspondence regarding the right hand side Long Lane telegraph pole (at the junction with Parkgate Road, when you turn right towards Chester). There is a legitimate safety concern here around visibility. It is suggested that the parish council, supported by me, perhaps writes to the relevant company with responsibility for this pole to ask that it is reviewed from a safety perspective. I would welcome the PC considering this point and we can proceed accordingly.

Correspondence from me is within the PC meeting papers from around 13/05/22 and at item 16(d). Comments and actions to be agreed will hopefully follow from the June PC meeting. (This relates to the adoption of the highway by CWaC and also surface water drainage matters).

Land in the vicinity of Meadowcroft (tree concerns)

I have been approached by a resident (as a follow up to correspondence last year) with concerns regarding the possible effect of trees in this area on their property. I have an enquiry re. ownership of the land with CWaC Property Services but this is proving a little illusive. If any PC members have insights, I would appreciate them letting me know. (An image was attached which shows the area in question).

* Property on Hermitage Road possibly being used as a gym facility. CWaC served a Planning Contravention Notice on 5th May 2022 to the site in question and are awaiting a full response.

* There was a regrettable incident involving Jubilee bunting on Smithy Close which I took up with Cheshire West Recycling (CWR) officers. It would appear that a refuse vehicle was driven into the road, some of the bunting was damaged and there may have been laughter witnessed from the operatives regarding the incident. Interpretations of the incident do differ a little but CWR have confirmed with me that they will issue a proper apology to upset residents after the bank holiday weekend.

* The ‘England’ sign on the approach to Saughall from Sealand has disappeared, most likely stolen. This has been logged with CWaC Highways and a replacement will be installed in due course.

* Planning – land to the rear of Roslyn, off Long Lane. I had a full update meeting with the planning officer allocated to this application on 13th May 2022. We await ecology reports, mainly relating to the presence of great crested newts on the site or in its immediate vicinity which is currently delaying this matter being resolved (either in terms of an officer decision or by reference to the Planning Committee – it remains ‘called-in’ by me). Residents continue to be kept informed.

* PROW FP10 (trees/hedges in the field near this route). Colleagues will recall concerns raised regarding this area with CWaC officers. They have advised as follows in relation to an investigation being undertaken: “Hedgerow regulations enquiries are quite complex and is usually passed to the Senior Tree Officer within my team to investigate and take appropriate action and unfortunately at present we do not have the expertise from others within Highways. At present this role is vacant and we are currently going through the recruitment process to fill the role with a suitably qualified arboriculture officer. I am sorry for any inconvenience but hope to be able to provide this service as soon as the vacancy is filled.”

* Incidents at the Golden Jubilee Field. The presence of ‘laughing gas canisters’ was reported to PCSO Swindells on 18/05/22 and a request made for a higher profile Police presence in the vicinity to discourage this sort of anti-social behaviour. At the same time I reported broken glass on the well-used facilities to Cllr Jenny Young and action was taken to resolve.