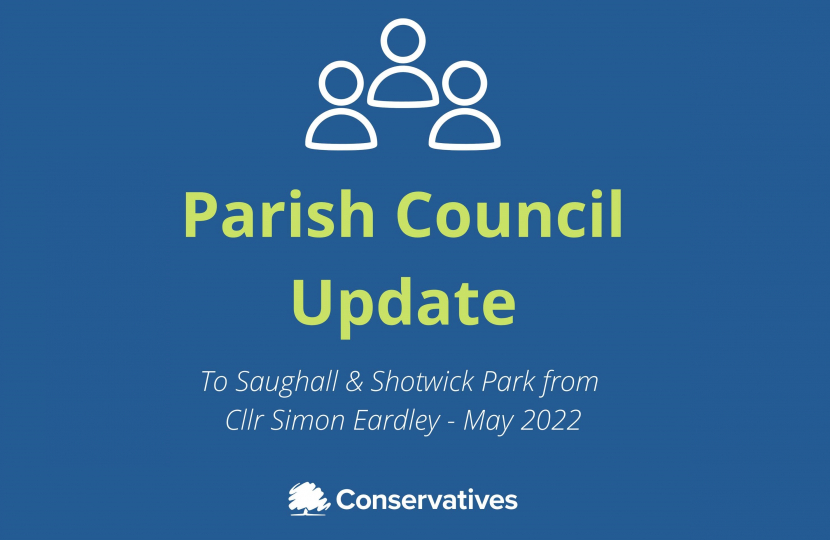 I have been in correspondence with Kay Parry of CWaC Highways over the last week and expect to receive the survey report in respect of the work we commissioned for Fiddlers Lane later this week. I will share as soon as possible with Cllr Kerr and others on the PC Highways Group.

In respect of the proposed Police and Crime Commissioner ‘average speed trial’, I have been in exchange with the Deputy Police and Crime Commissioner in the last couple of weeks on the matter. He informs me that no announcement has yet been made as a procurement process is still being undertaken but this should be completed soon. That will enable the trial to take place in four designated locations across the Cheshire Constabulary area. If Saughall is not successful in this first round then it is envisaged that a second one with the approved supplier will start very soon after so there may well be multiple 'bites of the cherry' so to speak.

Colleagues will know of my relatively relaxed view about grass cutting regimes generally and the proven biodiversity/environmental advantages that exist in respect of longer / less frequently cut grass. However, it has become apparent in recent weeks that some parts of Saughall have been severely neglected in the first part of the ‘cutting season.’ This was perhaps most acute in the Darlington Crescent / Smithy Close / Chapel Close area (but thanks are also due to Cllr Mike Johnson passing on concerns from residents in the Vernon Close area). The matter was raised with the Head of Environment at CWaC and I’m pleased to report that action has now been taken. Regrettably the areas affected are rather like ‘hay making fields’ in terms of their current state but I have impressed upon officers the need for a better quality service for the parish over the remainder of the summer.

Issues relating to inappropriate parking on the verge outside some of the new houses at this site have been raised previously and as a result road cones were placed along the route. These have been ignored by either a resident or a contractor visiting the area. I raised the matter with the business listed on the vehicle and they have indicated a willingness to take action which I expect to be forthcoming.

Following recent discussions, and ongoing negative feedback, which was outside of the consultation exercise that I undertook with residents of Greenway, I took the decision in early April to withdraw the proposed wildflower planting in this area from the CWaC programme of planned works. I was disappointed to do this because of the obvious benefits of it in my view but had no wish to irritate residents. I must say that I was further disappointed that, despite a request for information following the last meeting of the parish council, a parish councillor who indicated they had received much correspondence on the matter failed to respond to a direct request for clarification. At this stage, owing to the controversy this seems to have caused, I will most likely look to support other projects of a similar nature elsewhere in the Saughall and Mollington Ward where the prospect has been more favourably received. That said, I am prepared to progress the proposed scheme along Long Lane. Several attempts have been made to hold a site visit with CWaC staff to progress this but a date hasn’t yet been finalised. I will continue to press this in order that the village might benefit from this important work.

I have raised a number of concerns with CWaC (PROW team and Environmental Services) regarding issues that have been identified on this PROW route (see images attached for location and the issues). The points raised are:

I will report back to the parish council with any updates received.

I am Deputy Chairman of the CWaC Places Scrutiny Committee and have recently been successful in delaying (effectively meaning they won’t happen at all) plans to charge residents to deposit DIY / rubble waste at HWRCs in the borough (£3.70 per bag). A scrutiny meeting took place on Monday 11 April 2022 where the matter was thoroughly discussed and agreed that no charges would come into effect until a new contract to run the HWRCs was awarded. On the day of the meeting, the Government announced that it was consulting on making such charges impossible to levy in any case which means the policy of the ruling administration is almost certain not to be implemented.