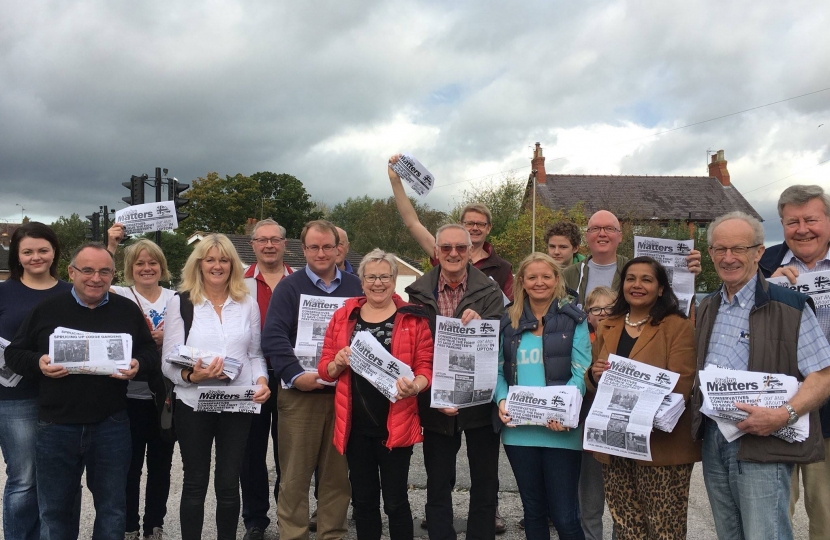 Below is the latest report from Councillor Jill Houlbrook for residents of Upton.

The recent mild weather has encouraged me to get out and about more on foot and this is of course when I notice just how much work the local authority still has to do in Upton.

It’s the issues which may be less important to the authorities which often cause the greatest complaints in the community. For example chatting to residents by the bus stop on Mill Lane I discovered that the hedge on the corner of Mill Lane and Egerton Drive has been used as a dumping ground for a large number of empty whisky bottles. These have now been reported along with the all the leaves and rubbish which need to be removed from the bus stop.

I’ve been following up all the complaints about and mentions on social media of the problems with overflowing bins and fly tipping in Upton. I’d like to thank our local CWaC street team officer who has been working hard to help me and residents.

The latest information I have is that perpetrators have been identified and action is being taken against these offenders.

In addition you may have noticed there are now several bins with smaller apertures which helps to prevent the dumping of domestic waste. However some people have been bypassing this, removing the bin lids. It never ceases to amaze the lengths to which some people will go to avoid disposing of their waste correctly.

Work is now being undertaken to find a way around the lid removals.

CWaC announced that on Valentines Day we should all love our streets. While I applaud the sentiment I’d like to remind them that in Upton with residents I’ve been working for years to keep our community clean, green, safe and environmentally friendly. In every report I have produced for this Parish Council over the past four years I have detailed at least one complaint about the cleanliness of our streets, the standard of grass cutting, the non repair of potholes, the need to cut back trees and hedges or the decline of our green spaces. It’s only now after four years that the local authority has come up with a plan.

In 2015 it was agreed that 106 monies (developer contributions to the community) would be used to install a cycle Lane on Liverpool Road.

Unbelievably residents and I are still waiting for this to happen. Apparently the scheme is ‘with the contractor’.

Several months ago the markings for the crossing outside Dorin Park school were painted on the road. The crossing is to help our young people gain more experience in independent travel; it has taken such a long while but at last on Friday the lights were finally installed. However they are not capped so I’m following that up on behalf of the residents.

Unfortunately one of our residents skidded on Demage Lane during the cold snap in January. She was in one piece but her car is not. The irony was she had just spent time spreading grit from the newly installed grit bin at the other end of the lane.

This is particularly important as the route is used as a cut through by emergency vehicles and by HGV drivers. Minor roads are not usually gritted unless they are bus routes.

Residents on Upton Dene are still being plagued by drivers parking dangerously and in an inconsiderate manner. I am working with Morris Homes and Highways to try to broker a deal on the unadopted roads of the estate. There is no reason for people who want to walk their dogs on the country park to cause the residents such inconvenience. There is a perfectly adequate car park on the park.

I have very much enjoyed working with and I’ve gained much experience from Upton Parish Council’s neighbourhood plan working group. The group is an excellent example of proper community working with residents and councillors getting stuck in together. I’d like to thank everyone with whom I’ve been working but in particular I must mention Councillor Jean Evans who has been instrumental in driving us onward and keeping us on the straight and narrow. Thank you Jean.

As I write this report we are still waiting for the planning inspector to send her report and decision on the appeal against the refusal of planning permission for White Gables. Around 30 residents attended the hearing and several spoke with clarity and passion in support of the refusal. It was a long day.

Very recently Aldi Stores have applied for a licence to sell alcohol up from 07.00 to 23.00 at the store being built on Countess Way. I have queried this and the planning officer has confirmed that the conditions for the store opening hours are 08.00 to 22.00 and therefore the store will not be permitted to open past this time. The opening times are conditioned for 10 years.

Members will have noticed the posters at Lodge Gardens and the Cockpit. These are inviting residents to express an interest in becoming a friends of the area. I’m hoping that there is a positive response and our community working with our Localities Team will have ideas to improve and enhance the Gardens.

A resident reported to me that the litter bin on Newhall Road had been removed by contractors when they left the area having repaired a water leak. I’m unaware why they wanted the bin but I immediately contacted StreetScene our ‘bin’ officer who is on the trail.

I note that Chester Civic Trust has commended the new homes on the corner of Newhall Road and Weston Grove in this year’s awards. It is good to know that we have a development worthy of such a mention in Upton.

It is disappointing that again this year Upton residents are facing higher council tax. The increase by Cheshire West and Chester means we will all be paying an extra 4.99%. I think we can be proud that Upton Parish Council has had two years of decreases and this year no increase in the Parish precept but that we have delivered an increase in services and we are developing plans for the QE11 playing fields.

I’m very pleased that after a rocky start relations between residents and the contractors working on Upton Lane have been resolved. There were problems when heavy machinery was parked on the grass verges that had been tended by local residents who had also planted bulbs in the area. The verges are being restored and residents have been personally contacted.

It’s good to see the progress of the new school building which will replace the prefabricated buildings at Upton Heath School. The pupils are taking an interest in the building and there are facilities for them to go on site and view the works.

Finally I’d like to thank our PCSO Jenna Tapley for everything she has accomplished in Upton. She is taking a break and will not be back with us until next year. Jenna has been a tremendous help and support to me and I’ve very much enjoyed working with her. I have already started working with PCSO Gina Eccleston and welcome her to our community.