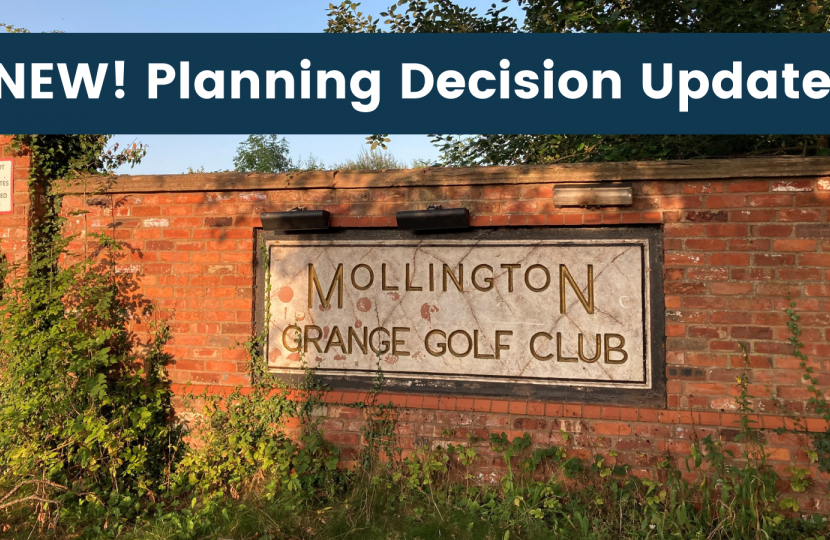 Following an appeal to the Planning Inspectorate by the landowners/developers of the former Mollington Grange Golf Course, the decision of the Cheshire West and Chester Council Planning Committee in July 2021 to refuse their application to build six houses on part of the site has been overturned.

The original application was 'called-in' for consideration by the Planning Committee by Saughall and Mollington Councillor, Simon Eardley, following significant concerns raised by local residents around new development in the greenbelt, the impact on the open countryside and Mollington village not being a sustainable location for development of this kind. The application was unanimously rejected in July 2021 but a right of appeal exists which has been used by the developers to get planning permission which will presumably now be enacted.

"This is a really bad decision in my opinion and goes directly against the express wishes of the residents of Mollington which were clearly established via a community survey I undertook on a joint basis with the parish council. Local residents were very concerned about this proposed development in the greenbelt and the detrimental impact it would have on the open countryside. Mollington, despite being one of the best villages in Cheshire, cannot sustain new development of this nature owing to its lack of services and relatively poor transport links.

“In my opinion, decisions like this should be made as close to those people most affected by it - the residents of Mollington - so I was heartened by the decision of the CWaC Planning Committee last July to unanimously turn down this application. Now, a remote official has set aside this local view and disregarded the important opinions of residents. What is the point of having a local planning system and council Local Plan in place with clear policies if big developers can get their way like this? It doesn't feel right to me.

"The Planning Inspectorate report cites four areas of concern. On three of the four points the official agrees that this development isn't appropriate and should not take place. He agrees that the proposed dwellings constitute new and inappropriate development in the greenbelt. He considered that the introduction of new dwellings would result in harm to the openness of the greenbelt. He agreed that the proposal would not fall within any of the categories of acceptable development in the countryside - the proposed development is not located in a place accessible to local services and facilities.

“On the grounds of 'other considerations', namely likely biodiversity gains, positive environmental impact and improved accessibility grounds he considers the application appropriate and approves it on that basis. This seems an odd balance of judgement. The report acknowledges that 'future occupiers of the development would be largely dependent on private motor vehicles to conveniently access day-to-day services.' In the midst of the climate crisis we face locally and nationally, this flies in the face of all logic and will result in damage to the environment as well as the ‘townification’ of this part of the village. It is simply wrong.

"Whilst I disagree strongly with this outcome, my role now is to make the best of a bad job. I'd like to know clearly what the developers intentions are for the remainder of this site which has massive potential as a place where nature can continue to thrive. It is already wilding in a very special way and is home to hundreds of different species of birds, insects, pondlife, trees, wildflowers, grasses and other nature. If the long-term aspiration is to build all over the land, I will strongly resist that and seek the support of residents to mount a vigorous campaign against it. I will hold the developers robustly to account when it comes to the benefits they have suggested will be the result of this application and will seek strong assurances that the precious nature, including significant numbers of great crested newts and bats, on the site is not damaged in any way. I also expect them to take more seriously the ongoing reports of anti-social behaviour, littering and reckless activity which they have largely ignored since taking ownership of the land. I will also ensure that CWaC Planning enforce the long list of conditions around this application that are clearly stated. This site is too important to get wrong and I'm fully committed to ensuring the best possible outcome going forward."