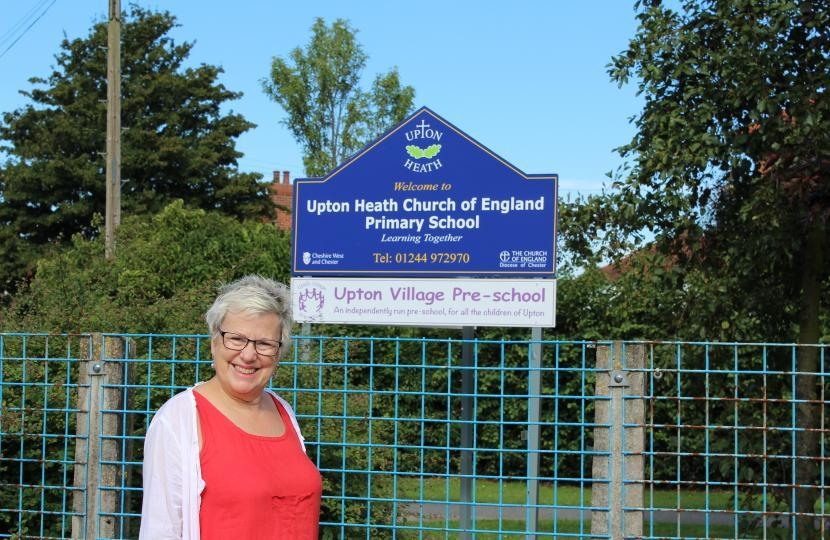 We are enjoying a lovely June with plenty of sunshine which following the pleasant spring has meant we’ve seen a spurt in the growth of vegetation right across the borough.

In Upton this has resulted in a huge number of complaints about the standard of, in particular, grass cutting.

The burial ground at Holy Ascension church has been closed for some years and is the responsibility of the local authority. Over the past few years I have had to complain that the grass hasn’t been cut and this year is no exception. The grass was growing over the graves and up the headstones. I’ve been contacted by so many people distressed by the state in which they found the graves of their relatives and friends. Unfortunately when the grass was cut and the area tidied and I use these terms very loosely, the situation was even worse. The cut grass was left piled on and around the graves. This is so disrespectful and uncaring and I see no reason why it should be tolerated in Upton. Had this happened at the Crematorium in Blacon the whole of Chester would have been outraged.

You will no doubt have noticed that the grass in the Cockpit had grown so long that it was difficult to walk there. Apparently the access had been padlocked although I have no idea why or by whom and the street scene team had difficulty gaining access. I could have lent them my bolt cutters had I been made aware. So not only is there a problem with the standard and frequency of grass cutting but seemingly with communication too. I have mentioned to the senior manger that had his team notified me of the problems them at the very least I’d be able to let residents know what was happening.

For a reason best known to the team the bank on Mill Lane is half cut and although I was informed the work would be completed this has not yet happened. Working with Streetscene this area will be sown with wild flowers.

In addition the streets are looking uncared for with litter and detritus everywhere. I have lost count of the number of reports I have sent through the SMYLE app in recent weeks. It’s now quite usual for me to send in 10 plus reports in one day.

The other problem is that although authorised,  the work is not being carried out in a timely manner. I, like residents find this extremely frustrating and I am constantly having to reassure residents that I have reported issues, often several times. When work isn’t carried out it reflects poorly not only on the local authority but also on me.

I am becoming increasingly less tolerant of excuses and the long delays. I believe this is partly due to the StreetScene team being grossly understaffed. leading to CWaC having to pay contractors to do the work that their own employees should be doing. This if course means the local authority is doubly spending our Council Tax.

The formal consultation on the double yellow lining on Bache and Egerton Drives has taken place and residents have indicated their preference. Once the Traffic regulation order is approved the work can go ahead.

As I reported last month residents of Queens Crescent have chosen to make the street one way and the process is now to apply for a TRO (Traffic regulation order) and Highways will move ahead with this as soon as they can but there is no implementation date and of course that depends on the TRO being approved. I have no update on when this is likely to happen.

Similarly there is no implementation date for the cycleway on Liverpool Road. This is yet another example of just how long it is taking for anything to happen in Upton. I’m beginning to become despondent that the work will happen at all!

Potholes I reported months ago are still not mended and the blocked grids on Caughall Road are still blocked.

There is still no date for the installation of the crossing on Wealstone Lane, the half term holiday was missed but I understand the most likely date will be in the summer break.

Last month I mentioned that because we are in the breeding and nesting season the local authority will not cut trees or shrubs until the end of August. However I have discovered that if the overhang is causing a danger or obstruction to a footway or highway then it can be cut back, but only by hand. This is particularly relevant on Caughall Road where there is a need for residents to cut back the trees and shrubs on their property. I have reported this several times as it’s particularly worrying that the bus stop sign is obscured.

The complaints about the rerouted no 1 bus continue to rumble on. Councillor Bryan and I are, meeting with residents, at their request on 4th July.

Stagecoach has agreed to change the bus timetable so that buses do not run down past Upton Heath School while children enter exit school each afternoon. It has become quite clear that the reason for the change of route is a capacity issue and that Stagecoach management has made the decision to use Upton Lane.

I would like to remind anyone taking or collecting children from the school that it is their responsibility to park in a safe and considerate manner. It is not acceptable to double park or to use a private driveway. I have visited the school and I am hoping that together we can find a way to improve the dreadful log jam that happens every day outside the school.

The planning application for the development of the White Gables site is on the agenda for 3rd July. I recently held a further meeting with residents and I am confident that we can present a cogent and persuasive argument to committee for refusal.

I am very grateful to our local Police, PCSO Jenna Tapley and PC Robert Brown for all the work they are undertaking to reinstate the codes which allow for the speed camera to be utilised in Upton. I’d also like to thank them for taking the time to deliver the kits to households on Egerton Drive, following the recent burglary. Residents have told me they are very impressed by and pleased with the personal service they have received.

Residents on Newhall Road have been in contact to complain that because cars park on the footway and several hedges were overgrown the width of the footway was restricted making it difficult for pedestrians. The hedges have been cut back and this has somewhat alleviated the problem. I did discuss with Highways the possibilities of making proper parking spaces on Newhall Road but this is highly unlikely ever to happen.