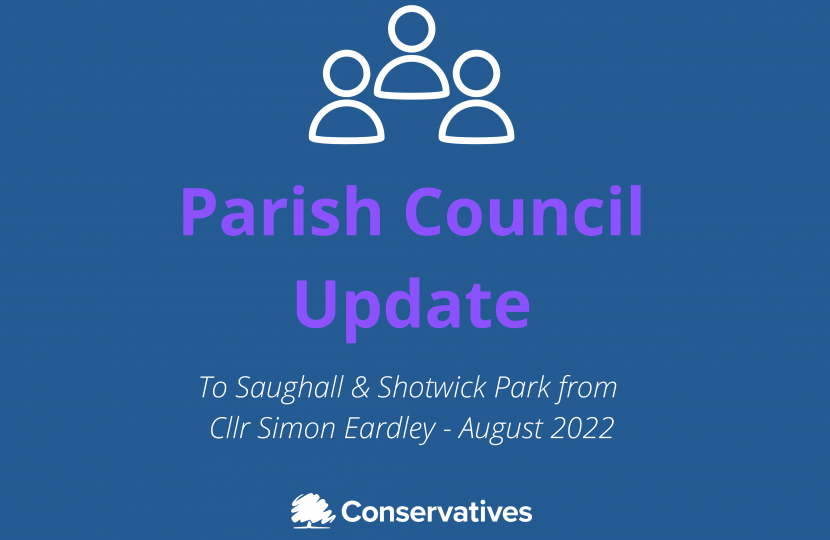 Following discussions with Cllr Mike Johnson on the location of this pole, I engaged with SP Energy Networks on the matter as they have responsibility for it (the query being whether they would consider moving it back nearer to the boundary of gardens at this location. The reply was ultimately as follows: “I have spoken with the Over Head Lines Team Leader and Head of Delivery and they have confirmed there is nothing we can do about the position of the pole, the only thing that would happen should that pole need changing is it would be put back in the same place. They have looked however at the surroundings of the pole and suggest for you to contact someone about the tree growth around it as that could be causing obstruction issues for drivers. I hope this has been helpful to you, I will now close down your enquiry.”

Subsequent to this, CWaC Highways advised as follows (the matter of a highways sign at this location being obscured / pointing in the wrong direction was also raised): “TJ has been to have a look this morning and turned the sign to ensure it is visible and will get it cleaned. He advises the hedge has not long been cut and to be honest I thought it was ok last time I looked pulling on to Parkgate Road. It’s a shame about the pole as it would help if that could be pushed back but appreciate you trying. I’m going to pick up with Streetcare too to see if there is any more that can be done with the grass on Parkgate Road as it tends to be a combination of that when it’s a bit long with the pole and hedge when it grows causing the problems.”

See image attached (not supplied here) which hopefully colleagues have already seen in situ in any case. The job to replace this sign was first logged in 2019 and frankly it shouldn’t have taken until around 13/07/22 for it to be replaced but I am grateful that it has now been actioned by CWaC.

I raised concerns with the PROW officer regarding accessibility onto the footpath off Fiddlers Lane (and also the issue of the signs needing to be stabilised here). I was advised as follows on 13/07/22: “This is just a quick message to let you know that I've cut the vegetation back in between Fiddlers Lane and the kissing gate into the field. I've also cut back the bits that were overhanging the road signs so they're a little more visible until Highways can have them straightened.” The signage straightening work remains to be actioned.

I was pleased to arrange and facilitate the meeting that took place to consider the issues at Fiddlers Lane and possible changes to the speed limit here on 22 July 2022 with Cllr Brian Kerr. I look forward to the parish council giving its feedback on what is proposed as advised below:

I am advised in respect of this planning application: 21/02113/FUL - Land At Fiddlers Lane. Change of use from Agriculture to Dog Walking and Dog Training – that a refusal notice has now been issued.

I have been notified by CWaC that, following the refusal of the planning application, it is necessary for planning enforcement action to be taken as the application was to keep using the field as a dog walking and training facility, along with the retention of hardstanding, shelter and caravan. The enforcement notice will seek to cease the use of the land for dog walking and training purposes, related to the business. It is also recommended that the notice include the removal of the hardstanding, artificial grass, timber enclosure and caravan (some of this is already underway / has been actioned prior to this formal notice being issued). These are integral to the use of land and were assessed as part of the application. The fencing would not require planning permission, due to its height and location within the site, therefore it would not form part of the enforcement notice. The enforcement notice will allow 6 months to cease the use of the land and remove the hardstanding, artificial grass, timber enclosure and caravan. The owner and tenant of the land will have the option to appeal the enforcement notice and the planning refusal if they wish.

See attached notice (not supplied here) regarding an appeal that has been lodged regarding planning permission refused by CWaC for change of use of a one bedroom annex to one bedroom dwelling. The matter will be dealt with by means of written representations.

I had a useful meeting with PCSO Swindells on 22 July 2022 and was impressed by her enthusiasm for the work she is involved with. I know she is keen to ensure strong ongoing engagement and visibility in the community and has a number of ideas around that. One suggestion was the possibility of joint ‘surgery’ activity between the police, the parish council and me as the borough councillor on a periodic basis in a profile location such as the Co-op. I am keen to pursue this further and would welcome comments from the parish council around this in due course.

I have signed up to walk the Hospice of the Good Shepherd “7 Locks, 7 Mile Grand Canal Sponsored Walk” on Sunday 11 September 2022 from 10am. The Hospice, which will be known to you all, is situated in my Saughall and Mollington Ward in the village of Backford and is without question one of the most important organisations around. Full details about the walk can be found here:www.hospiceofthegoodshepherd.com/gs-events/canal-walk/

The walk will set off from the Hospice, go walk through Backford village and join the Shropshire Union Canal Path. It will follow the canal right around Chester city centre and out to Christleton finishing off at The Cheshire Cat pub. If anyone is inclined to sponsor me, it would be much appreciated. Sponsorship is possible via the JustGiving page that I’ve setup below: