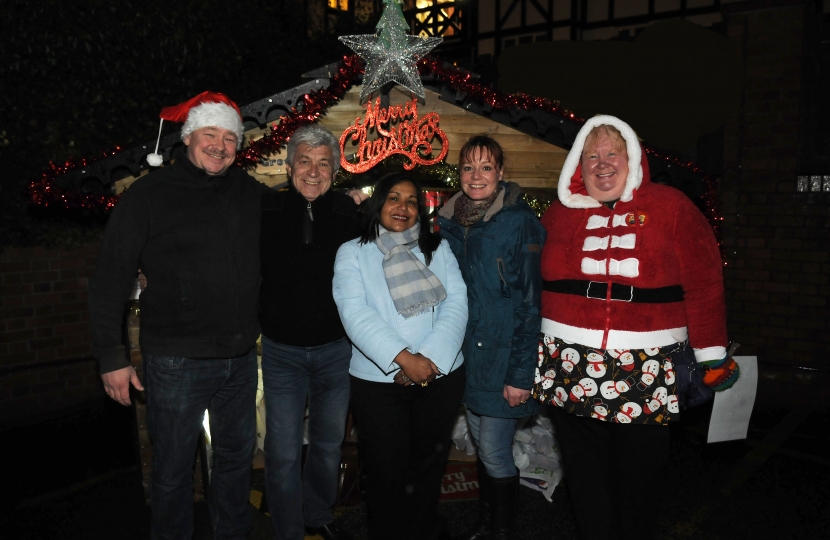 The Handbridge community came together last Thursday for the popular annual Christmas event, with local businesses, schools and West Cheshire College joining forces to make the evening a great success.

Overleigh St Mary's Primary School students sang carols on the night and also took part in the "Christmas in Handbridge" poster competition. Freya's picture was chosen as the winner, with Kelis and Daisy close runners up.  The bright and colourful Christmas drawings are now on display at the Uniformity Clothing shop.

Over at the Handbridge Petrol Station, Ian Costall and Tim Salter from West Cheshire College erected Santa's grotto which was originally constructed three years ago by joinery students at the College.  After the Christmas event the grotto will be moved to West Cheshire College's foyer and be a collection point for food which the College will distribute to local Cheshire food banks.  Members of the public are welcome to pop into the College and make donations.

Event Organiser, Julie Rowland, who took over the event when former organiser Marjorie Meacock sadly passed away, said:  "Although we are all devastated we decided to continue with the evening and hold the Christmas event in Marjorie's memory.  We have nominated her favourite charity, the Teenage Cancer Trust, to receive proceeds from the raffle and we are thrilled that £250 has been raised so far.  Raffle tickets are still available to purchase from Brown Sugar and The Carlton."

Cllr Razia Daniels commented:  "We have a fantastic community spirit here in Handbridge.  Residents shared mulled wine in Brown Sugar, took their chances on the tombola at Apollo Blinds and children had their faces painted at HL Financial in anticipation of meeting Santa in his grotto.  Despite the bad weather, the event was well attended and we were able to pay tribute to Marjorie, who worked tirelessly for the Handbridge community."

Cllr Neil Sullivan added: "We are delighted that so many people have joined together once again to celebrate Christmas in Handbridge.  This annual event goes from strength to strength thanks to hard work from local volunteers."