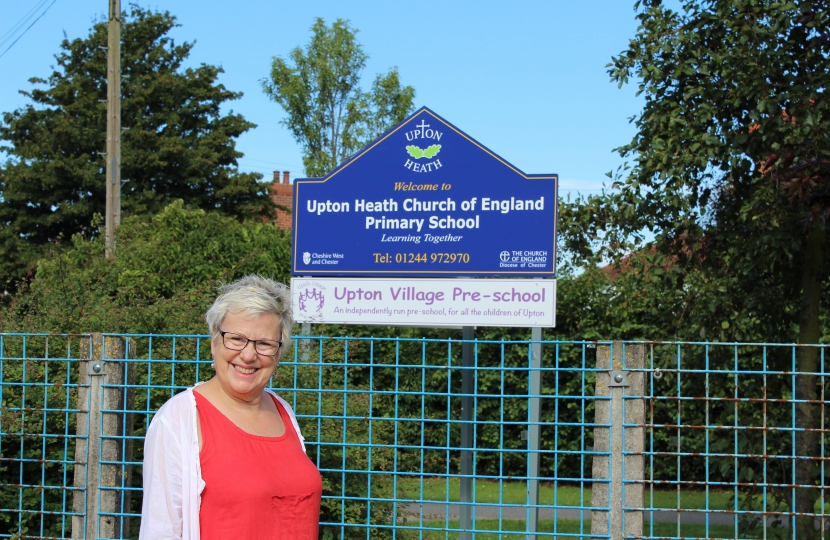 February is proving to be just as wet and cold as was January and I have no doubt you all share my frustration about the proliferation of pot holes. I have been reporting as many as I see and I’ve been encouraging residents to use the CWaC website reporting tools. It’s still not clear whether the SMYLE app is working or not, so my advice is to use this link. It’s is also very frustrating when I receive notification of work completed when it clearly hasn’t been attended too.

I don’t usually go into specifics but for example I reported litter along A41, Long Lane on 22nd January and on Countess Way on 29th. Neither of these requests has been actioned.

I’m also waiting for the appalling amount of rubbish along Duttons Lane to be cleared. It’s pretty obvious that the Lane hasn’t been cleaned for some considerable time. Likewise there is a blocked grid on Caughall Road which is totally bunged up with leaves and other detritus. I’ve reported this several times and taken officers to see for themselves but the grid is still blocked. I have escalated these reports to the Senior Manager so I’m hoping for action. Unfortunately our residents don’t have the luxury of access by email to officers and often feel their complaints are ignored.

You will all be aware that there is a problem with a grid on Wealstone Lane. When it rains the puddle turns into a flood which has been causing many problems and recently two cars almost met head on at the spot as each driver tried to avoid the water on each side of the road.  Children and adults have been soaked by passing cars. Darren and I have both reported this problem and it’s been passed to a member of the highways team for action. However despite asking several times for an update on what is planned to alleviate the problem, I’m still waiting.

There is not yet a decision about plans for a Zebra crossing on Wealstone Lane. I received comments and concerns from several residents who feel the crossing would be better placed nearer the library and in one case the resident wants it on Mill Lane with a new entrance to Dorian Park School created. I met with Highways and School Travel Officers on site at the end of January to discuss residents’ concerns. Hopefully we shall soon have a decision on the positioning of the crossing.

The issues with parking on Bache Hall Estate are not resolved and I fear they will be exacerbated once parking is prohibited on Cousens Way. I have arranged to meet with Kay Parry from Highways and with Councillor Samuels on 23rd January so I shall give a verbal update at Parish Council.

It’s regrettable that despite a long bedding in time for the change in speed limit many motorists are clearly not adhering to the 20mph on Upton roads. Our local Police Office and PCSO have been out on Weston Grove and they will be deploying the Smiley SID on Wealstone Lane. I’d like to hope that drivers realise the speed limits are in place for a reason.

At the time of writing this report the planning application for White Gables has not been determined nor is there a confirmation of to which planning committee it will be referred. I continue to stay in touch with residents and we have had three meetings, kindly hosted at Upton High School. I also receive regular updates from the case officer, now Nick Smith.

Your Housing Association tenants at Upton Dene invited me to their recent informal residents’ meeting. There are several issues on which we are working together and I’m hopeful residents problems with anti social behaviour and fly tipping can be resolved.

Members I’m sure you are aware that sadly The Frog public house has closed. It’s my understanding that the brewery will call time on the building. The Frog is subject to Community Asset Order so I’d like to suggest that not only should this be included in the NDP but that the Parish Council looks at the model of the Centurion in Vicars Cross and seeks to liaise with the brewery.

Following from our discussion at the last Parish Council about the Weston Grove shops and taking into consideration the concerns of the businesses and residents that the area is in need of some revitalisation, I’ve been considering ways in which we might make some practical differences rather than simply holding more discussions. I therefore launched on  social media, the idea of a Christmas Market on Weston Grove. I’ve been overwhelmed by the positive response to my suggestion with nearly 4000 people viewing the post on Facebook. Obviously this will need detailed planning, but I believe that there is an appetite for this as an expansion of last year’s Christmas celebrations at the Pavilion. I also think it’s important that this is seen as a community event supported by the Parish Council but run by people with experience of organising such events.

It’s good news that our War Memorial is to be repaired this year when we commemorate the centenary of end of the 1914- 1918 1st World War. I’m working with the Friends of the Countess Health Park on a project which will include a poppy trail from our War Memorial to the park. The poppies will be carved from the wood of a cedar tree which will be taken down from the Beeches within a few weeks. The Friends have put in a funding bid, the result of which we should know very soon. Once we know whether we have this funding we will be in a position to give full details of the project which is called Fallen for the Fallen. This will be very much a community project. I’m also talking with the Welfare Officer about how best to include the Dale Camp.

I’m hopeful that as part of the 100 year commemorations the Parish Council will want to fund a Silent Soldier.

There is lots to keep me occupied for the next months!