Updates on the A41 from Councillor Houlbrook 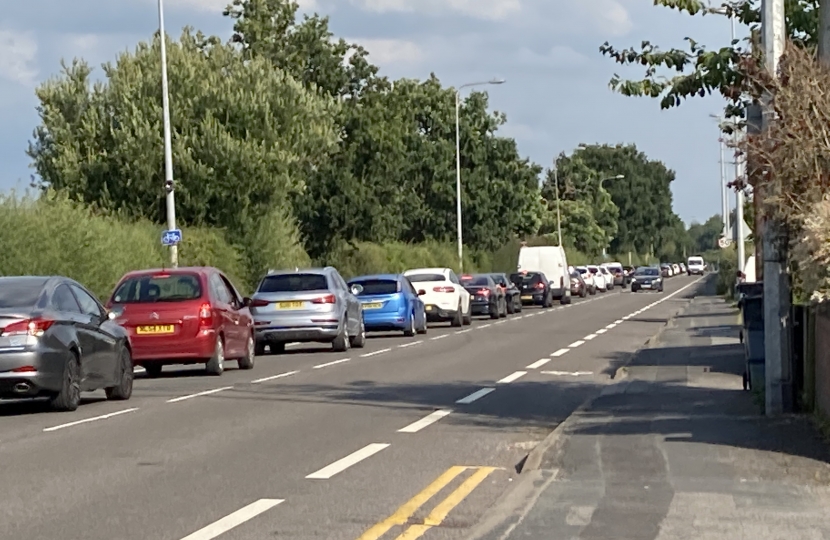 As Jill continues to provide updates on the A41, follow it in this thread:

Before the amendments to the lining were undertaken a scheme plan was sent to the local members, cycling groups and emergency services for their comments. I sent you an e mail on the 1 September explaining that I had discussed your concerns, alongside other responses with Mark but the decision was made to go ahead with the amendments to the lining .

The video survey data before the changes provides data regarding queue lengths on all arms of the junction as well as  traffic flow and type . The post video survey data will be repeated, under the same conditions, to see what difference the amendments have made to the traffic flow and the cyclists. I will happily arrange a date in the diary to share the data with you once it has been analysed.

In terms of the scheme rationale, for cycling facilities through the junction and on the A41 travelling towards Hoole Roundabout, Highways were asked to incorporate the original changes (July 2020) in a maintenance scheme (by our previous Head of Service Sean Traynor) in line with the council commitment to introduce cycling improvements across the borough, however at that time the traffic patterns were significantly different and the zoo was closed. This year the cumulative effect has been felt from increases in both normal and of course zoo traffic . The authority was then asked to try and reduce the congestion on the A41 and these amendments have now been introduced to try and ease congestion.

As with any changes to road layout, it will take some time for the traffic patterns to settle and get used to the new layout. In previous years we have made changes from the zoo roundabout for Northbound traffic to try and encourage traffic not to travel through Upton on the A41 it maybe time to review what is in place including signing and sat nav.

I am sorry that you feel you and your residents haven’t been listened to and I would like to assure you that we do our best to keep everyone updated with the latest progress.

I spent time at the junction this week and it is very obvious that what I feared would happen, and actually alerted Mark to, is happening. There is so much breaking and speeding after the lights as drivers jostle to get into the one designated lane. On several occasions vehicles travelled down the cycle lane because they were unable to filter into the one lane after the traffic lights. Many of my residents have made the same observations.

I am still bemused as to why the little used cycle lane is necessary.  There is a perfectly adequate segregated lane on the northbound carriageway of the A41. It is used by walkers and cyclists alike. The Sustrans greenway is also easily available to cyclists. I cannot understand why it is thought that cyclists would prefer to put themselves in danger in a lane adjacent to fast flowing traffic when the alternatives are so much safer and more convenient.

It is clear to see that the congestion on the A41 southbound has been increased not reduced by the introduction of the lining. I can only hope that someone will in the words of my community ‘see sense’ and admit this is not working.

As an added comment for the community please be aware that the notice of the amendments were sent to me in an email at the same time as the press release went public. The decision was made before my conversation with the Head of Highways so there was no ‘consultation’.

I took the opportunity yesterday to stand by the Mannings Lane junction and take a few photos and a video of drivers using the cycle lane and the left lane to turn into Mannings Lane in order to jump the queue of traffic and push in the other side of the lights. Incredibly dangerous. I suspect CWaC will tell us that changing the markings to two lanes at the lights will stop this but as the road returns to one lane for traffic on the other side of the junction it will just be dangerous in a different place and will not reduce the queues.

I also noticed that many more vehicles than has been usual are using Mannings Lane I suspect as short cut to the A56 using roads not built for the volume of traffic.

As I drove back to Upton it’s obvious drivers are leaving the A41 at Dutton’s Lane, using it and Acres Lane and Fox Covert Lane again as a cut through to A56 and again these are small country lanes. I’ll be passing all this information to Highways in the hope they can see sense and realise the push to increase cycling on the A41 is resulting in ‘rat runs’ on country lanes where cyclists should feel safe, increased pollution on these roads, more mileage in vehicles, in fact the exact opposite to what they think they are achieving. Utter nonsense.

I have an update on the A41. It’s not what we wanted and it’s not what I understood would happen.

The surveys associated with the A41/Mannings lane junction are being undertaken week beginning xxxxxxx. I have committed not to reveal the date so as not, to quote: ‘ inadvertently disrupt traffic patterns’.

I asked the officer to confirm that the survey will be for only one week and whether this a manual survey or by camera and requested if camera led then that the survey takes place over a month rather than a week.

This is the reply I received

‘It’s a mixture of manual and video surveys. It is standard practice to do one week on the majority of our sites, as the data needs analysis this takes some time and as I hope you can appreciate a month’s worth of data at a small junction won’t bring any added value just extra cost and we need to be mindful of where we spend our decreasing resources.’

I originally brought the problems of the contentious cycle Lane on the A41 to the attention of officers last August. I’m sharing my email and the reply here:

Dear xxxx, several residents have contacted me about the new road markings on the A41 (Long Lane) between Plas Newton Lane and Hoole roundabout, south bound. I am a regular user of the stretch of this road and I have to say that like my residents I find the markings confusing and likely therefore to be dangerous.

Please may I have an explanation of how the markings are supposed to work and the reasoning behind the design?

Here is the reply:

‘Thank you for your email.

In terms of rationale, during the Covid lockdown we witnessed a significant increase in cycling across the Borough. Sustaining that behaviour change will secure wide-ranging benefits from improved health and fitness, through to helping tackle the climate emergency by decarbonising transport. Thus we should seek to enhance the cycling and walking infrastructure wherever possible.

The surfacing scheme for the A41 provided one such low cost opportunity. You will be aware that the A41 was already a single traffic lane southbound from Plas Newton Lane, to provide cyclists with an on-road segregated cycle lane. However, when approaching the Mannings Lane junction the segregation stopped and then discontinued fully beyond the junction – such disjointed arrangements actively discourage cycle journeys.

Therefore the road space has been reallocated to afford cyclists a safer continuation of the facilities along this strategic corridor, whereby the segregated facility is now extended in length beyond Mannings Lane and allows a safe connection to/egress from the A41 Greenway access in so doing. This was developed in liaison with cyclists further to the Council’s Active Travel Forum and Walk Ride Thrive initiatives.

It is acknowledged that any such new arrangements will take a short while to settle-in and for motorists to understand. We have new road layout ahead signs in place as warnings but we will review the need for lane indication signs to further assist motorists in the transition.

The borough will see a number of other ‘pop-up’ road space reallocation schemes in the coming weeks that respond to the walking and cycling agenda. I’m sure that motorists will often have an adverse reaction to ‘their own’ former space being prioritised for use by other road users but the benefits of walking and cycling are significant, and we will run educational/communication campaigns alongside to provide an explanation for our actions but also to encourage behaviour change. I hope this helps.’

Good morning and it’s great to see the sun back!

A quick update on the A41 cycle Lane situation. I understand that senior CWaC officers have met with the Zoo management to discuss the situation and formulate a plan.

I fully support the Zoo and appreciate just how important it is to Upton and the local economy.

However I am disappointed and not a little annoyed that our community was not, by way of elected members, offered the same opportunity. I received no acknowledgement or response to my email supporting Chester Zoo and no officer is keeping me and therefore our community updated. It appears that unless I ask for information, none is forthcoming and that which I have received has been a one line reply.

I intend now to contact the senior management and I will post my email and any reply I receive on my page.